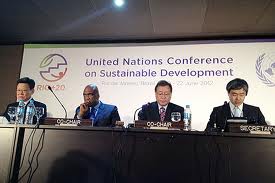 While Indian Non-Governmental Organisations  are by no means as well networked as they were at the original Earth Summit in this coastal Atlantic city, despite the boom in electronic communications, Kalpavriksh, based in Pune and New Delhi, has fired a strong missive at Prime Minister Manmohan Singh shortly before his arrival at Rio+ 20.

Titled ‘Come to Rio If you can demonstrate environmental leadership’, Ashish Kothari calls upon the PM to steer clear of ‘predominantly market and fiscal-oriented ‘solutions’ to environmental and development problems, such as those being promoted under the ‘Green Economy’ model’.

‘Green growth’ is the leitmotiv of this summit, espoused by governments, politicians, business leaders and even some NGOs.

“The last few days in Rio have not seen such political leadership. On the contrary, governments have even ignored the wise and pragmatic counsel of thousands of civil society representatives here. If they are listening to anyone, it is to the powerful private corporate sector,” the open letter continues.

“We realise, that for you this will be exceedingly difficult. India is no exception to global trends, with recent reports suggesting we too are beyond our natural limits, and we too have glaring inequalities that are only getting worse. Our own ‘development’ path, in particular over the last 20 years, has shown scant respect for either environment or for communities dependent on nature,” it says.

“Even as we lurch from one crisis to the other, such as the current one facing our economy, our only response seems to be ‘more reforms’ in other words, more of the same poison that has created or worsened the problem in the first place. Our single-minded pursuit of ‘economic growth’ (as if it was a magic wand to eliminate poverty) has:

Increased the rate at which we are trashing our ecosystems (witness the rapid growth of forest diversion for industrial and infrastructural needs; over 50 per cent of forest land cleared for mining since 1981, has been in the period 2002-2011).

Displaced ever-growing numbers of people (with reliable estimates putting the number at over 60 million!);

Allowed or encouraged landgrab (not only in India, but increasingly in other countries such as Ethiopia where Indian companies are being given massive lands at the cost of local people);

Sustained or increased serious inequalities (such that the richest 10 per cent of India own half its wealth).”

In sharp contrast with 1992, when some Indian NGOs such as the Centre for Science & Environment in Delhi was even part of the official Indian delegation, this time around, they have failed to put up a common front.

Even at the site of their activities, at the same Flamengo park which was the venue 20 years ago, all international NGOs are difficult to trace in the sprawling strip along a beach.

As environmentalists often exhort people to ‘think globally and act locally’, a three-member team from Stree Mukti Sanghatana from Mumbai, headed by Jyoti Mhapsekar, is campaigning against the use of incinerators for garbage.

It has made world headlines for pioneering the Nisarguna plant for disposal of biodegradable city waste. Starting with a highly successful pilot plant at the Bhabha Atomic Research Centre in Mumbai, the organisation has helped set up as many as 150 projects in states such as Kerala, Karnataka, Goa and Gujarat. As the title of the NGO suggests, this method of sorting and recycling urban waste provides employment to poor women.

The non-officials most in evidence at Rio are the assorted religious,  inter-faith  groups and Indian godmen, swathed in saffron. Obviously, when the world is gripped by both an economic and environmental crisis, Brazilians and others have turned to religious leaders — possibly out of frustration with politicians.

Instances of Indian NGOs showcasing their successes are not easy to access in this congested city, with the official Convention Centre — newly opened in 1992 — some 50 km from the city proper, and one has to make a big effort to contact them.

However, in documents submitted by the United Nations Environment Programme initiative, called ‘The Economics of Biodiversity’ (TEEB), the leader author  of which was an Indian, former Deutsche Banker Pavan Sukhdev, there are several examples of Indian success stories.

For instance, in ‘TEEB for Policy Makers’,  the document cites how in 2006 the Supreme Court drew up a scale of compensatory payments for converting different types of forest land to other uses.  The court based the rates on a valuation study by an NGO founded by Sachdev, the Green Indian States Trust.

This included various forest products and services such as timber, fuel wood, forest produce (such as tendu leaf for beedis), ecotourism and non-use values for conserving charismatic species like the Royal Bengal and Asiatic lion.