Greenaccord in memory of Luis Sepúlveda, guest speaker of the first International forum 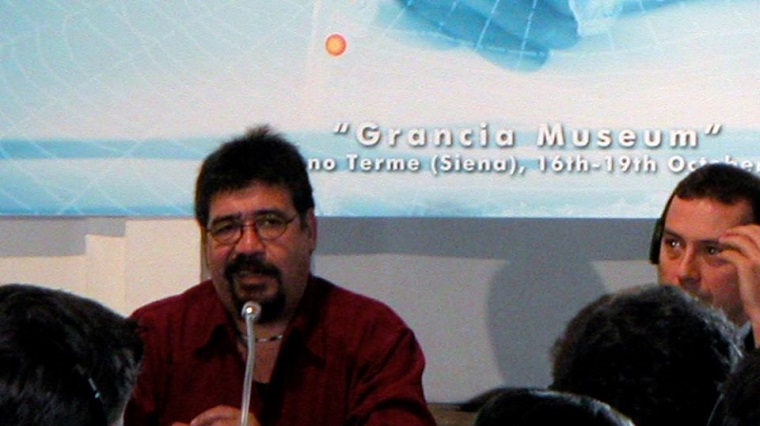 A remembrance for Luis Sepúlveda, guest speaker of the first International Forum for Information of Safeguard Nature of Greenaccord in Rapolano in 2003. Greenaccord extend their condoleances to his family’s for the loss of the great Chilean writer, journalist and poet.

The Tuscan cigar, the unbridled dance with his wife Carmen Yáñez, the medieval dinner, the conversations. At the center, the environment, the great challenge of the media.

Luis Sepúlveda, who attended the first International Forum for Information of Safeguard Nature, which took place in Rapolano Terme (Siena), left an indelible memory in the founders of Greenaccord. The Chilean writer passed away Thursday, April 16 at the age of seventy, in the university hospital of Oviedo, in Asturias, in north-western Spain, following complications from Covid-19. By the end of February, he had jumped to the headlines to be the first illustrious patient tested positive for coronavirus. The illness had manifested on his return from a trip to Póvoa de Varzim, Portugal, where he had gone with his wife Carmen for a literary festival. She too had presented the symptoms at first, but then everything was back.

The speech that Luis Sepúlveda gave at the Forum, entitled “The responsibility of the “intellectual” at the time of the outrages to the Nature“, has touched the eighty journalists present, coming from all over the world, not only for the competence, but also because it showed through the love of the Chilean writer for his land, whose natural resources were already beginning to be sold off to foreign multinationals. His activism, not only for the protection of the environment, but also for the people who live there, dates back to when, at the age of fifteen, he joined the Communist Youth. That was the starting point of a political militancy against all the dictatorships of the seventies which, under the regime of General Augusto Pinochet, also cost him prison. It came out thanks to an Amnesty International campaign, but at the cost of exile.

He became a great of South American literature precisely because his writings are the result of his experiences. In fact, he had lived for seven months in the Amazon rainforest, to study the impact of western “civilization” on the population of Shuar Indians. He drew inspiration from it for his first book “The Old Man Who Read Love Stories” (released in 1989), which he wanted to dedicate to Chico Mendes, one of the most firm defenders of nature against human destruction, and that for this battle he was killed.

Greenaccord, a Christian-inspired association, was just born in 2003, with the aim of training journalists on the issue of environmental protection. That Forum was his first initiative and stood out for the authoritativeness of the speakers who participated. In addition to Sepúlveda, the Uruguayan Mario Lubetkin, General Director of Inter Press Service (International press agency specialized in news related to social and economic development), the Brazilian writer Eduardo De Miranda, Mons. Aldo Giordano, Secretary General of the Council of European Episcopal Conferences, journalist Gianni Minà, Director of the anti-capitalist orientation magazine “Latin America and all the South of the World”, Maria Becket, Coordinator of “Religion, Science and the Environment” (Non-governmental organization who seeks common ground between religion, science and the environment).

Other prominent figures were the Indian engineer Rajendra Kumar Pachauri, President IPCC (Intergovernmental Panel on Climate Change), and the philosopher Emanuele Severino, who passed away between January and February of this year.

“With the death of Pachauri, Severino and Sepúlveda, Greenaccord in the first months of this strange 2020 has lost three friends – says President Alfonso Cauteruccio -. Of Luis (Lucho) I was struck by humanity and affability. Journalists shooting him with questions and he didn’t deny anyone. While we were at one of the three-day dinners, on the menu he wrote a dedication for my daughter Chiara who, after reading the delightful release “The Story of A Seagull and The Cat Who Taught Her To Fly” had already become his fan”.

But the suggestive anecdotes related to that Forum 2003 are not finished. It happened that “we were three friends at the guest-house bar that hosted the participants,” says Giuseppe Rogolino, a Rai journalist at the time and one of the founders of Greenaccord. «Me, my colleague Minà and Luis. A cool evening, warmed by the excellent whiskey, and interesting conversation. Then Gianni went to sleep. We stayed still. I lit an “Ancient Tuscan”. Luis was a passionate smoker, so I took the opportunity to tell him the story of this Tuscan cigar, whose characteristic is the double fermentation of tobacco. It was 1815, in full Austrian occupation, a load of tobacco arrived from the United States, but a heavy downpour drenched it during transport to the manufactory. Instead of throwing it away, it was decided to let it dry. Considering it, however, of poor quality, it was used to produce low-cost cigars to be sold in the taverns. Instead, it was a success. He conquered Garibaldi, then the intellectuals of the time, the fighters. It was the symbol of the redemption of a country fighting for freedom, because it was the first Italian cigar. Luis was fascinated by this story. He said to me: “I would like to include it in one of my stories.” I don’t know if he really did it, but the poetry of that moment remains in my heart”.

Below some photos of the first International Forum for Information of Safeguard Nature of Greenaccord, in 2003 during the Chilean writer’s speech and a photo of the dedication to Greenaccord.