Toward a new deal between economy and ecology

The decline of economy is due to its dependency from a virtual value, the currency, the coin, that in the recent phase of consumerism is so far from real values: human capital and natural capital. If “human economy” wants to continue to produce wellbeing, it must accept to be a subset of “natural economy”, intercept flux of matter produced by its circular mechanisms, put constraints in it, i.e. machines and structures, to direct it temporarily for our advantage, and finally release it to the same original flux, in a still usable state. In this way it will assume a function no more parasitic but symbiotic. It will be connected to natural cycles without destroying it, recovering the co-evolutionary link between nature and culture, building an economic web suited to the ecological web; thus we will have a mosaic characterised by biodiversity, technological diversity, and cultural diversity, able to produce a durable prosperity [1].

So we need to redefine the relations between economy and ecology. For economy we intend “human economy”, a set of conventions we created to evaluate only selected effects of the flow of materials and energy across human society, or we would better say “human organised systems”. Ecology is almost the same: it studies the flows of matter and energy among the species that share a territory. In other words, ecology studies the flow of materials and energy across “biological organised systems”. This is the “economy of nature”, which differ from “human economy” in not selecting parameters or effects in its analysis, but it evaluate all the effect occurred in the relation web between species. Having not been invented by man it is always real and holistic and never virtual as the recent phase of “human economy” is. “Natural economy” is embedded into the living and not living matter and determine its functioning. But man is part of biosphere; this is the reason we asserted that “human economy” is a subset of “natural economy”.

We are part of a process of aggregation of matter and concatenation of phenomena; a propagating organisation process that drive biosphere. Starting from big-bang, universe tend to more and more complexity diversifying structures so that diversity of the next possible events increases as fast as it can. The most is matter diversity, the most are the possibility and modality they can aggregate one another and generate further innovations and symmetry breaking. Stuart Kauffman observe in the evolution of universe an emerging and ceaseless creativity, the evolutionary emergence of overwhelming organization of process. [2]

For the most part of the story of homo sapiens, about 200,000 years long, “human economy” was closely related to “natural economy”. The great change started in XVI-XVII century but the turning point was in XVIII century, particularly after the Lisbon disaster. In 1755 Lisbon was destroyed by a triple disaster: first of all an earthquake. The earthquake caused a fire which destroyed whatever remained after the earthquake. Then in the end a tsunami covered everything that was still there. Lisbon was one of the most important centre of trade, politics and culture of Europe and the disaster was taken very seriously by all of the most intellectuals of that time. There was a famous discussion going on for long time between Rousseau and Voltaire on what sort of lesson should be learned from this disaster. The general conclusion drawn from it was that man can’t rely on nature, but have to conquer it, to force it, to do better than it does because it is blind and indifferent to human needs. The misunderstanding in which fell “human economy” was to suppose that science and technologies could substitute nature. The success we had in our recent story reinforced the belief that technologies could replace any ecosystem service. From this point “human economy” started to be definitively separated from “natural economy”.

The “distance” we can observe now between human and natural economy is represented by what we call “pollution” that is already damaging the basic mechanisms of the Earth, that govern the flows of materials and energy among atmosphere, hydrosphere and lithosphere. All the ecosystem services on which is based the conservation of life and its evolution results dangerously damaged and only partially substituted by technologies. Scenarios drawn by the scientific community joined in UN conventions, depict very deep crisis that will occur by the end of this century, such as climate change, deforestation, loss of biodiversity, water and food scarcity, etc. Economic costs related to such crisis show clearly that the most important crisis that the world is going to face is not the financial downturn but climate change. The financial crises is already producing negative effect in the economy of the most countries but could be solved in a short run, being related to “human economy”, a system created by man and that could be reformed. The scale of climate change costs, if the growth in greenhouse gas emissions is left unchecked, in the long run will dwarf the economic downturn, and mistakes in managing these risks may be irreversible. Human economy in its most recent evolution seems to be concentrated on finance that move its action on a short run; so it doesn’t consider seriously effects that will occur in the long run.

It is a long time we have overtaken the limit of economic growth and entered a regime of anti-economic growth, where marginal costs, that is the negative effects of growth, exceed the benefits. That is what results from the calculation of GPI (genuine progress index), that from ’80s is constant while the negative part of GDP, that related to social and environmental costs, continues to grow. 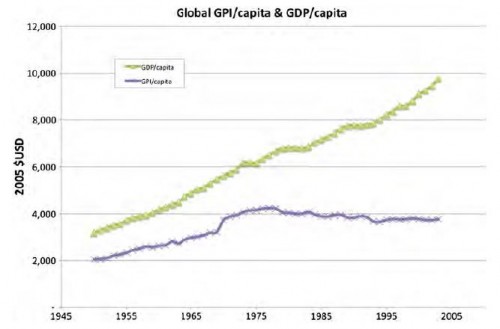 According to the calculation of the global Ecological Footprint, on 20th of August 2013 humanity had already used all the resources that the planet can reproduce all along the year and we emitted all the CO2 it can capture, increasing the ecological debt that we are leaving to the future generations; in other words we use the 35% more resources and ecosystem services than biosphere can replace, consuming the natural capital existing on our planet. [3]

From what is said above, we realize that if humanity wants to continue to produce wellbeing for future generation and expand it to the whole world population, it must rapidly reform the economic system leaving the unrealistic scenario of unlimited growth of consumption, that have been demonstrated to be damaging and impossible in the long run. The consumption of goods and the industrial production must be limited to goods and products essential or at least able to produce a real wellbeing abolishing wastes and unnecessary goods. Financial resources must be switched from industrial production to social, sanitary and cultural services and to implement “green infrastructures” to reduce actual costs of land distress and prepare countries to adapt to future climate change. [4]

The global consumerist model, homogenise trends and consumption, using the same resources and the same technologies; for this reason is extremely vulnerable differently from the economy of nature that funds its success on biodiversity, that makes the ecosystems resilient, i.e. able to adapt to changes, and with high ascendency, i.e. high evolutionary potentiality. Furthermore, the pressing interest of different nations on the same not renewable resources generate inevitably conflicts that will accompany the incoming scarcity of such resources. Biosphere, in its cyclic proceeding that allow it to continue growing in quality without growing in quantity, don’t have limits, as it doesn’t exist limits in producing complexity. Passing from ecosystems simple and poor of biodiversity, toward ecosystems complex and reach, it pass from a prevailing capture and dissipation of exergy used for metabolism of the system, to a growth of exergy stored [5]. This in thermodynamic terms reveal the passage from a quantitative development to a qualitative one.

Solutions must be found simultaneously for both crises, financial and ecological, as we currently have a critical window of opportunity for an integrated response. The current human economy, uniformly globalised, has a weak adaptive and evolutionary capacity. It is necessary to re-connect economic and ecologic webs through a diversity of technical compatible solutions, so that the social webs restart to improve the human capital, re-valuing the cultural diversity. It is needed a regional mosaic approach to endorse cultural diversity and to drive production and consumptions to a concept of wellbeing specific of each culture and each situation. This will allow us to return into the evolutionary pattern of the “natural economy”, where the “human economy” will be able to develop in quality, producing an unlimited and durable prosperity.