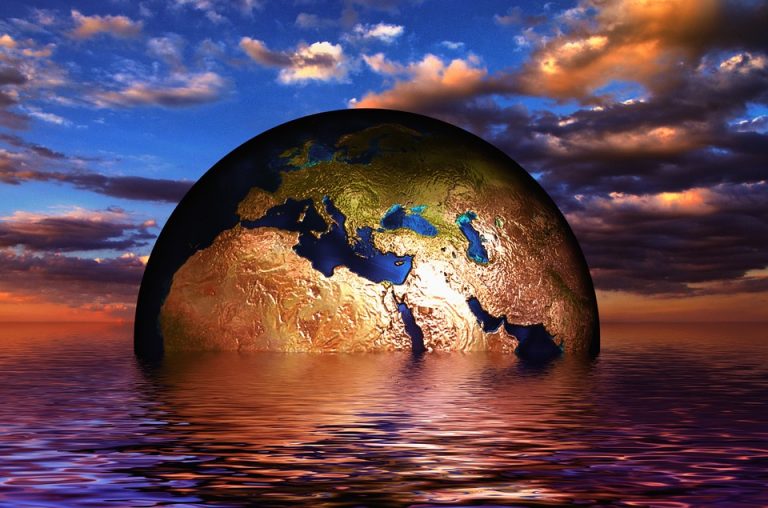 Factor T, as time, is crucial to understand climate change.

Climate has always changed all along the history of our planet. According to Milanković theory periodical changes in climate occur due to the astronomic Earth’s movements. The more important movements are:
• The 100.000 years cyclic variations of the eccentricity of earth’s orbit
• The 41.000 years cycle of variation of Earth’s axis tilt
• The axial precession with a cycle period of about 26.000 years

During these cycles, change the spatial and temporal distribution of temperature on Earth surface. The consequences of that is the alternance of glacial and warm eras. But not necessary it implies a change in energy embodied in the troposphere, the lowest layer of atmosphere.

Humankind originated about 3 million years ago in Rift Valley. Therefore, they tackled many climate cycles, but the very slow speed of these processes, allowed it to adapt and consequently evolve. A climate change in Rift Valley, that produced a dramatic rarefaction of vegetation, transforming the forest in savannah, is commonly considered one of the reason that induced some of our ancestors to drop down from trees and assume an erect posture, for a safer running from a tree to another trough the savannah.

But in Earth’s history there were also dramatically fast climate changes, due to intense volcanic activity, or to the impact of big asteroids or comets, as happened in Yucatan about 66 million years ago. The short time effect compared to an enormous explosion, produced immediately disruptive impacts all over the world, followed by a global sudden climate change due to dust and ashes dispersed into the atmosphere. Notwithstanding this change duration was of few decades, its rapidity gave to the living species very poor possibilities to adapt. It resulted the 5° Mass Extinction, of Cretaceous-Paleogene, with the loss of more than 70% of all species, including non-avian dinosaurs.

In 2000, two eminent scientist, Paul Crutzen, chemist of atmosphere and Vice-Chair of IGBP, The International Geosphere-Biosphere Programme, and the biologist Eugene Stoermer, proposed the hypothesis that Earth had left the Holocene and entered a new geological epoch, the Anthropocene, started when the industrial revolution began, at the end of 18th century. This suggestion was based on the huge impact of the human activities on the Earth System. They considered especially the impacts of climate change and nuclear industry. Many other scientists have joined this project,concerned about the fact that human activities interact as strongly with environment as the asteroid that provoked the 5° mass extinction; they agree that we are marching toward the sixth mass extinction. The problem is not climate change, but the high rapidity of its growth and magnitude that it is reaching.

The biosphere temperature depends by the atmospheric concentration of GHGs; by this concentration depends the balance of energy flow at the upper limit of troposphere, the layer from the ground up to about 15 km altitude. When we will stop emissions, the concentration will stabilise for several centuries at the reached level, starting a very slow drawdown, driven essentially by absorption into natural sinks. Since emissions are growing very fast and consequently concentrations too, and considering that at certain level of temperature growth will collapse natural enormous sinks akin permafrost, already rapidly melting, and at a certain level of concentration, also the sea absorption will be saturated and will start to release the CO2 stocked, every year passing will leave a shortened time to stop GHGs emissions. Furthermore, ice melting will reduce albedo and increase the energy embodied into troposphere. Therefore, emissions drawdown will start from a higher level, and the slope of the depletion graph will be higher. It means more difficult and more expansive, and less probabilities of success in matching a safe concentration pattern. Consequently, we have a very short time to drive humanity in a safe climate future.

We must decide now at which level we want maintain the change. GHGs atmospheric concentration, before industrial revolution in 18th century, was about 280 ppm; currently,inside the RCP8.5 pattern, it is over 400 ppm accelerating the growth, up to reach 936 ppm in 2100. Going on this pattern in 2100 the temperature increase will be between 2.6°C and 4.8°C. IPCC experts agree that a safe anomaly is below 1.5°C, because over this limit in the past our planet suffered tremendous impacts. An elaboration drawn by CMCC for the Italian Ministry of Environment, foresees that, continuing on RCP8.5, temperature, in summer season, will raise of 9°C, confirming that Mediterranean area is a hotspot. Remaining inside this pattern, adaptation will be possible only in the short term, within the activities of disaster risk management. In this scenario, in a long term no plan or action could accomplish the goal of a safe future for people living in Mediterranean region.

If emissions peak in 2020 it will be possible to move to a safe climate scenario; delaying the peak to 2025 will give too little time to transform economy. If we don’t move rapidly to a lower concentration scenario, akin the RCP2.5 suggested by the Paris Agreement, the biosphere will be exposed to terrible impact; as humancivilization has developed in the latest 11,000 years of stable climate, what is happening to the climate now is likely to mark the end of civilization within 200-300 years.

We come backagain to the problem of time. It must be clear that eliminate anthropic emissions will not switch off global warming; the time when we will accomplish the zero emissions goal will determine only in which radiative scenario we will continue for several centuries. Many dangerous climatic effects could be restrained but not avoided. Ice melting will continue for several centuries and consequently sea level will continue to rise; we can only slow down it, having more time to adapt, maybe with new technologies that currently we cannot imagine. Now we can only suppose that metropolis populated with million people, sited in coastal areas, in the distant future probably will be abandoned. Therefore, to have more time to build up new cities could be determinant to save billion people.

Climate change is the hugest challenge that humankind has never afforded before. Involving global phenomena, it needs a strong cooperation, political as scientific, particularly in Mediterranean region; not only since it is an hot spot, but also because in his history, local climate change shaped as the environment as the cultures, creating a rich network of biodiversity and cultural diversity in a long period of coevolution process. It is a process that modelled landscape, vegetation, ecosystem services, for several thousand years. The logs needed to build fleet and cities caused a large deforestation. Probably an excess of watering and tillage of agricultural soil caused the desolation of Nineveh, the richest city of Assirya, 6,000 years ago (Zophoniah 2,13-15); in the Bible we can read a clear narrative of long succession of droughts and floods that provoked migrations and conflicts.

From these evidences coming from an historical and paleo-climatic analysis, our generation that is deeply changing, not the local but the global climate, has three lessons to learn:

The first is the importance to consider the environmental dynamics, like water cycle, soil, carbon and nutrient cycle, etc.

The second is the importance of consideration of environmental boundaries and not fall into the illusion of eternal abundance, as consumerism do at present.

The third lesson is that nobody can be safe by himself; no people and no country can preserve himself from global change.

International cooperation is essential to face the challenge of climate change. Climate change is the highest threat for each person and each country. Cooperation among countries must be a priority on any regional conflicts to have a safe future. Climate change ask nations to choose between conflicts and cooperation; the difference is a global disaster or a possible soft landing, toward a future of prosperity.

Generally, governments tend to consider climate change only a problem on the political agenda, but not a basic element to reformulate the priorities. Commonly the policy horizon is about quinquennial and is organised per sectors. These model of governance does not fit with climate change, a phenomenon growing fast in the future, requiring investments that will give benefits growing in terms of costs avoided, in a multi-decennial horizon. Therefore, we see national energy plans based on a substantial invariance of the economic model, stressing the substitution of fossil fuels with renewables. It sounds compelling, and in compliance with achieving the short-term milestone, but risk to create a too high hurdle to match the long-term goal, i.e. zero emissions in 2030. Politics have difficulties to consider climate change a discontinuity of business as usual that does not expect turning points.

To conclude with a short sentence, we urgently need to heal the split between what we know and what we do.